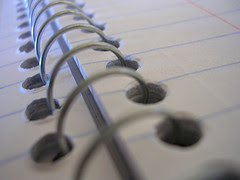 She was a determined little soul,
never wanting anyone close enough to feel the fighting going on in her mind.
She would sit still, almost lifeless in the morning lull, hearing only her own breathing, feeling only her own thoughts, wondering where to go from here.
~~~~~
Then slowly, one by one, the birds would come and their insistent singing would break a hole in her cherished silence, forcing her to listen to something besides the beating of her own heart.
She promised her eyes to close,
just to listen
and while she swam in the stillness of it all,
the day disappeared.
~~~~~
And when the dusky evening finally arrived with it's gentleness and the silence was upon her once again,
along with the fighting,
she decided she to had to write.
~~~~~
Approaching what felt like endless hours, some of the fighting thoughts that had filled her mind had withered away and now lived on the paper in front of her.
Maybe if her thoughts were written words instead of jumbled and floating in her mind,
they just might make some sense to her...
something she could now touch, something she could erase, something she could spend hours just looking at
or
maybe because on paper
her words just might make sense.
~~~~~
But it was a struggle.
The words crept slowly out of her. And as she carefully lifted her hand from the page to actually see the words that she had pleaded with, that had finally decided to flow freely,
she realized they didn't seem to make any sense to her after all. They were locked together, still fighting on paper, the same way they were in her mind...
and looking and feeling rather foreign.
~~~~~
She didn't want to start over, so she looked at each word carefully and decided which ones needed to stay and which ones could go.
And when she finished, she inhaled her long overdue breath, realizing that no matter what she did now, no matter what she wrote today or tomorrow,
those thoughts in her mind were still there,
refusing to leave completely.
But maybe those thoughts were now a little fresher and maybe she felt a little less congested, a little more settled and maybe even a little more confident.
~~~~~
So then she stopped.
And thought.
Maybe it wasn't fighting that was going on in her mind. Maybe her thoughts were only struggling to make sense
that she had mistaken them for fighting.
And maybe she had let others close enough to see her
and to know her.
And maybe, just maybe
her written words were all she needed....
in order to feel.