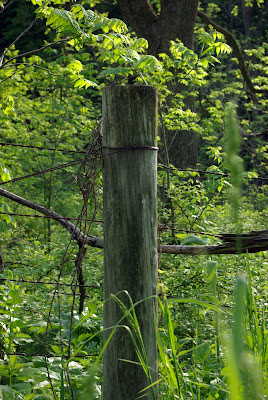 Just down the road from our weekend cottage is a huge expanse of land...acres and acres of beautiful green trees and plants and moss covered rock formations that have all been left untouched for years. 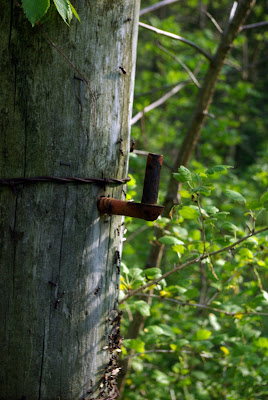 I'm not really sure what my mind was thinking the other day when my body felt an actual need to get out of the car as we passed this land, but I try to listen to myself when this happens.  We have driven by this property hundreds and hundreds of times in the past two years, but this time it was different.
I knew I just had to have a photo of the old fence post that had blended into the snow covered hills all winter, but now, for some strange reason, was suddenly screaming
"see me?" 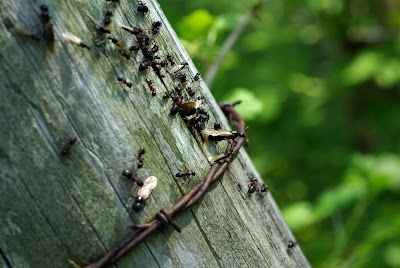 After my first photo, with a fear of poison ivy clouding my thoughts, as my capri wearing legs were way too deep into the grasses for this time of year, the fence post in front of me became alive right before my eyes.
I looked back at my husband waiting patiently for me in the car with an "yikes...ewww" look on my face and at the same time went running back towards him so I could switch to my macro lens.  Quickly, I tried to describe to him what I had been looking at..."I don't know, ants or something or huge flying ants" and he asks if they're termites and I'm like, "sure, maybe they're termites with huge wings and queens and kings and lots of family members or maybe they're just gross, but whatever they are, I want to get closer."
And now this is where it gets fun...I did get close...really close...and continued to be grossed out with the combination of flying crawling things and that once again I was in grass I couldn't identify...but isn't this what photographers do?
~~~~~
now here's the end of the story
only once or twice have I copyrighted a photo of mine
but only because I was practicing playing with watermarks
but
this time
even though I didn't want to do it
I felt the need to protect this photo
because
I think I want to enter it in a contest
or
blow it up really big
or
use it for greeting cards
or
sell it to a bug extermination company
~~~~~
so here's the final photo that I took
before any of those flying buggy ant termitey things flew straight into my face
and
really grossed me out
{and because I posted this photo through flickr
please tell me that you can see it as I have had flickr/blogger/photos issues in the past} 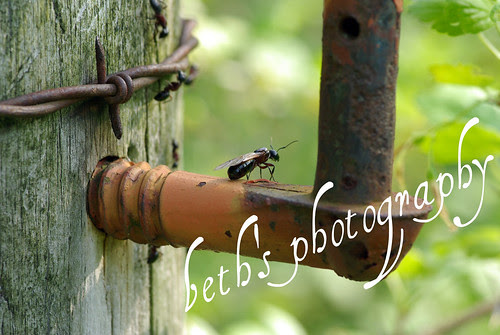