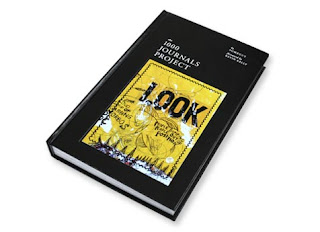 film: 1000 journals
1000 journals is a film about people whose lives are touched by blank journals released into the world in 2000 by san francisco-based artist, someguy.
some people found a journal, some had signed up to receive one in the mail.
some worte in them, others doodled, pasted in photographs, or added art.
some kept them.
some passed them on.
there were no rules and no one really monitored their movements. and yet they are connecting and inspiring people worldwide. number 526 returned to someguy filled.
what happened to the rest ?
this film tells their stories.
~~~~~
I decided that I really wanted to see this film as I had purchased the completed book, titled: 1000 journals project
earlier this year
and loved the concept.
So hubby and I took off for state street on sunday afternoon,
to a lecture hall at the museum of contemporary art
and enjoyed every mintute of this film.
If it comes to a city near you
go see it
as
you will not be disappointed !!!
~~~~~
Posted by beth at 9:27 AM